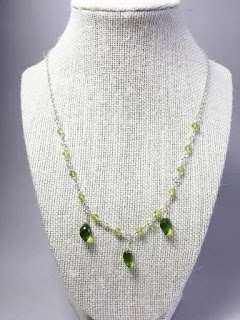 Peridot is said to host magical powers and healing properties to protect against nightmares and to bring the wearer power, influence, and a wonderful year. As peridot is a gemstone that forms deep inside the earth and brought to the surface by volcanoes, in Hawaii, peridot symbolizes the tears of Pele, the goddess of fire and volcanoes.

Today, most of the peridot supply comes from Arizona; other sources are China, Myanmar, and Pakistan. This gemstone comes in several color variations ranging from yellowish green to brown, but most consumers are attracted to the bright lime greens and olive greens.

Peridot, in smaller sizes, often is used in beaded necklaces and bracelets. 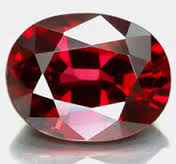 The spinel is often assumed to be other gemstones because it tends to resemble either a ruby or sapphire. In fact, some of the most famous rubies in history have turned out to be spinel. But its distinguishing features, like its octahedral crystal structure and single refraction, are what sets it apart from other gems. Spinel also has a lower Mohs hardness than ruby and sapphire.

Significant deposits of spinel have been found in Cambodia, Myanmar, Sri Lanka, and Thailand. It has also been found in Afghanistan, Australia, Brazil, Madagascar, Nepal, Nigeria, Tadzhikistan, Tanzania and the U.S.

Vivid red is the most desirable color of spinel gemstones, followed by cobalt blue, bright pink and bright orange. The more affordable stones are often those with paler colors, like lavender. You may also find spinel in black, violet blue, greenish blue, grayish, pale pink, mauve, yellow or brown. So many choices!

When shopping for spinel, a good quality stone should have no visible inclusions. The more inclusions, the less valuable the stone. Spinel can be found various cuts, like octagons, trillions, squares, rounds and fancy shapes, like ovals, pears, and cushions.

Carnelian is another traditional birthstone for August, and was the August birthstone in the old Roman, Italian and Hebrew calendar. Before the gemstone became the birthstone of August in these ancient calendars, carnelian was a zodiac stone for both Virgo and Leo, the two zodiac signs falling partly in the month of August. So close to sard in characteristics that their names are often confused, carnelian is the red variety of chalcedony. This August gemstone is believed to fuel passion and desire.

Ruby is the birthstone for August in the Hindu calendar. This August birthstone is the red variety of corundum, which would be otherwise called sapphire if occurring in another color. The August gemstone is believed to boost courage and mental power.

Before ruby was the birthstone for August in the Hindu calendar, sapphire was the August birthstone in the old Hindu, also known as Ayurvedic calendar. This August gemstone is corundum occurring in a variety of colors except red, which would be called ruby, but is most popular for its deep blue crystals. Blue sapphire is specifically identified to be a zodiac stone for Virgo, which falls partly in the month of August. The August stone is believed to bring inner peace and counteract depression.

Diamond is the birthstone for August in the old Tibetan calendar. This August birthstone is most popular for its bright white crystals, though the gemstone occurs in a great variety of colors. This highly valuable August gemstone is believed to protect its wearer from misfortune.

Moonstone is another traditional birthstone for August. This August birthstone consists of alternate layers of orthoclase and albite, giving the gemstone the appearance of glowing from within. The August stone is believed to chase away anxiety

Topaz is still another gemstone recorded to be a traditional birthstone for August. This birthstone of August is a transparent gemstone most widely regarded as yellow in color during the Middle Ages. The August birthstone is believed to stimulate optimism and increase strength.

However, the alternate birthstone of August in Britain, sardonyx, which is also the traditional gemstone for August in the old Polish and Arabic calendar, is popular for its red bands. The other most widely accepted traditional stone for August, carnelian, which hails from old Roman, Italian and Hebrew calendar, is also red. It is apparent that red is the traditional August stone color. This is seconded by the Russian August gemstone, alexandrite, which is half the time red, as well as by ruby, the August birthstone in the Hindu calendar.

Of course, other colors are also seen among the birthstones for August. Sardonyx, moonstone and diamond are white; topaz is yellow; while sapphire occurs in all other colors beside red.